August 12, 2022
Bay Area thrash band releases their 2nd single ahead of their third studio album, to be released on October 7, 2022 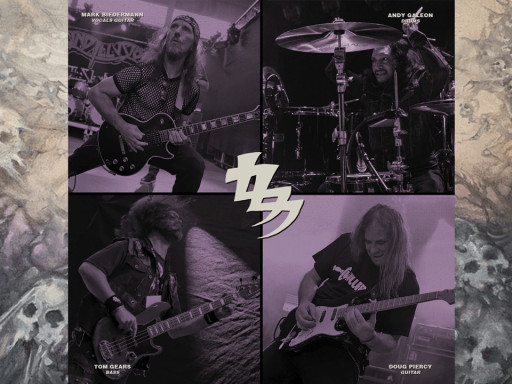 Guitarist Doug Piercy says, "Protomolecule has the perfect storyline and you can tell how much fun we had filming, especially the slime and laboratory scenes. We're also excited to launch the contest and give away equipment like strings, lyric sheets and a signed drumhead we used to record Wrath of the Gods!

"The new album carries the same writing style and tradition of The Sane Asylum, with even more musicianship and songwriting qualities with the addition of Tom, Andy and myself. It's been so much fun writing and recording this new album with everyone."

"Wrath of the Gods sounds really amazing. Playing with Mark, Andy and Doug has elevated my playing and songwriting exponentially", says bassist Tom Gears. "This album kicks a**. The bass and drums thunder and the shredding guitars will melt faces! We have a Blind Illusion cannabis brand, available at select California dispensaries so you can feel the Wrath of the Gods when you listen to the album!"

Blind Illusion has deep roots in the Bay Area thrash metal community, with ties to other classic thrash bands like Metallica, Heathen, Possessed and Exodus. Their music has been a cult favorite internationally for over 40 years and commenced as a worldwide touring act again in 2017.

Wrath of the Gods will be released on October 7, 2022 via Hammerheart Records and will be available on CD, vinyl and digital. Blind Illusion is also launching a giveaway with the release, giving fans the chance to win equipment used in the recording of the new album. More information can be found here.

Wrath of the Gods tracklist

Previous article
Author Kendall Gott’s New Audiobook ‘Gone to Kansas: 1855’ is an Inspiring Tale of Courage That Follows a Young Man Who Sets Off to Make a Name for Himself Out West
Next article
Heartland Home Services Welcomes Pat’s Heating and Air Conditioning