October 18, 2022
Investors Can Now Have an Opportunity to Participate in Potential Profits of New Blockbuster Movies, Television Shows, Video Games and More 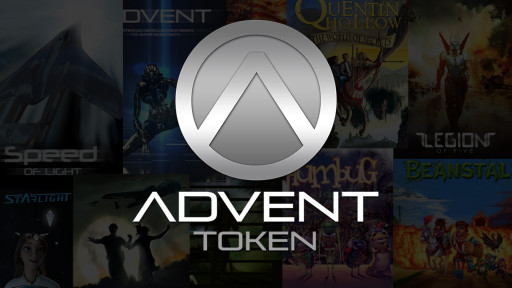 Advent Entertainment, a leading film and entertainment funding company, announced today that the much-anticipated Advent Token, the first digital security that opens the door for investors to participate in potential upside in future Hollywood movies, television shows and video games created by Advent Entertainment, will officially launch on Oct. 24, 2022. Advent Token will be listed on INX ONE, the world's first and only fully regulated, end-to-end platform for listing and trading both SEC-registered security tokens and cryptocurrencies.

"We all grew up with icons like Stan Lee. Can you imagine profiting from the characters he created? Advent Token allows you to join in the potential profits of Hollywood productions," said Lee Baker, CEO of Advent Entertainment. "But our goal is so much more than potential future profits. Through next-generation technology, we aim to create a worldwide community which immerses creators and fans into film, television, music, and games using augmented reality, virtual reality, cryptocurrencies, digital securities, NFTs, the metaverse and web 3. Join in production and creation. Bridge the gap between the digital world and the real world. See superheroes, speed-of-light jets, intelligent robots, and World War II fighter planes in the lobbies of theaters, at shopping malls, in restaurants and in your homes. Experience the movie and so much more."

The team of Advent includes Academy Award-winner Keith Merrill and is led by Lee Baker and Jarom Sidwell, who have worked on projects such as Avatar, Avengers, Spiderman, Race to Witch Mountain, as well as with Stan Lee. Advent joined forces with DIMA, known around the world for its work on Parasite (Academy Awards®) and Squid Game, and Golden Loop Group, which runs a cryptocurrency wallet (GLG Wallet) and coin, and is working with K-Pop, K-NFT and K-Comics. They are currently producing a television series called Advent, which is about the rise of artificial intelligence to save humanity. Fans can join the production through the Advent Robots NFT collection, consisting of 11,111 unique robots based on the television series.

"We are very excited to offer the Advent Entertainment security token on INX ONE. They deliver to investors around the world an opportunity to invest in the entertainment sector on the ground floor," said Shy Datika, CEO of INX. "Advent is led by an extremely talented team with a solid track record of success, with some incredible names assigned to the issuance. Democratizing alternative investment opportunities is what INX does best and we look forward to the opening of the raise."

The Advent team has created a slate of film and television projects and plans to use security tokens, cryptocurrencies, NFTs, the metaverse, video games, augmented reality, and virtual reality to enhance fan participation in the projects from start to finish. The plan is to see superheroes, animated characters, speed-of-light jets, intelligent robots, and World War II fighter planes in the lobbies of theaters and in your own home.

For more information about Advent Token, please visit https://adventtoken.com/ or visit Advent's Discord link at https://discord.com/invite/vE4Th3QbUU. To learn more about INX, which continues to lead the industry in providing novel trading and capital raising financial instruments to enterprises and companies worldwide, visit https://www.inx.co/.

Advent Entertainment is a film, television and interactive multimedia company that is connecting powerful storytelling and the latest technology to expand entertainment capabilities beyond the brink of human imagination.

INX Securities, LLC ("INXS") is a member of FINRA/SIPC. This communication is provided for informational purposes and is not a solicitation or an offer to buy or sell any financial instruments. Please visit www.inx.co for more information and additional disclosures.

Previous article
Not Only Putin: Russia’s Deep State, Society, Foreign Assets in the War Against Ukraine (full audio)
Next article
There’s a new political party forming. See who’s behind it