March 14, 2019
'Diamonds and Curlz' to debut in Minneapolis during 2019 celebration weekend 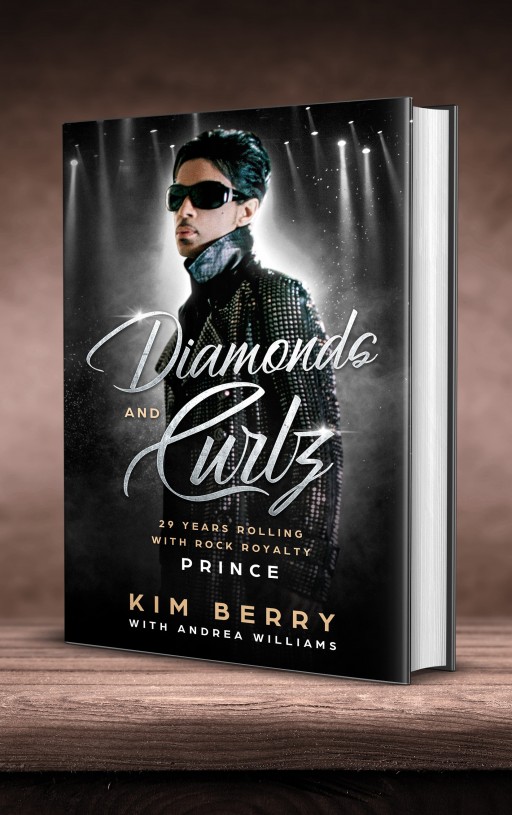 Longtime Prince hairstylist and first-time author Kim Berry will release her new book "Diamonds and Curlz - 29 Years Rolling With Rock Royalty Prince" Tuesday, April 16, 2019. The memoir will be available on Kindle and in paperback on Amazon.com.

The elite L.A. based celebrity hairstylist is excited to add "Author" to her long list of accomplishments. Taking a page from Prince's playbook, the new memoir was conceptualized, written, and self-published by Berry's KimBOnSet Publishing. Through fabulously told personal accounts of tour life experiences and other shared moments with Prince, Berry brings this labor of love to the masses. A captivating, heartfelt recollection of her journey alongside one of music's most prolific artists. Berry's desire for the book is to serve as a healing agent for peace to all who have never truly received closure after his death, nearly three years later.

"I want them to know he was a human being … special yes … but perfectly imperfect just like the rest of us. He made mistakes but incredible strides at the same time. Prince laughed, cried, and brought beautiful music to the world. I want fans to feel proud that we lived during an era of GREAT music. 'Prince was the soundtrack of our lives.' We know what to expect from the realm of music because the bar was so high. Live and live now, on or off stage. You only get one shot at this thing called life. Your greatest disadvantage is to miss your mark," says Berry.

Kim was the non-musical entity in his life. Uniquely blessed, she occupied the space between his life and art. Her story takes readers behind the purple curtain to give them a glimpse of the MAN, not the rock star. She respectfully reflects on Prince - the brother, friend, husband, and father; the human side of Prince Rogers Nelson few were privy to experience.

As Prince's personal hairstylist for almost three decades, Berry traveled extensively and primped him for stages all over the world. She also collaborated on what would become iconic looks for countless appearances and photo and video shoots. According to celebrity makeup artist Yolande' Denise, "Prince has always been the artist of our time who best reflects life and creativity. My girl Kim B. (as she is known in the industry) was a part of this magical crown … Kim has been a trendsetter for so many years and we always looked forward to what Prince was going to do next."

Kim's book will be debuted in Minneapolis April 24-28, during the Celebration of Prince 2019. Book signings and other events are posted in the news and events section of her website.

Preorders for "Diamonds and Curlz - 29 Years Rolling With Rock Royalty Prince" are underway now on diamondsncurlz.com.

Celebrity hairstylist Kim Berry is Hollywood's best-kept secret. Known in the industry as Kim B, Kim's work has been seen all over the world in videos, print, film, and television.

Kim is best known for keeping the mane of Prince coiffed for nearly three decades, creating some of his most iconic hairstyle looks. Berry, an elite hairstylist based in Los Angeles, received her formal training at Pacific Beauty College. The universe aligned her life to cross paths with Prince, starting a whirlwind education at the "University of Prince Rogers Nelson."

Her work with Prince has been featured on the pages of Vogue, Allure, W, and Rolling Stone magazines, to name a few. She has worked with fashion photographers Patrick Demarchellier, David LaChapelle, and Randee St. Nicholas.

In addition to Prince, Kim has serviced Tinseltown's who's who with the likes of comedian Katt Williams, Wendy Raquel Robinson, Tamera Mowry-Housley, Niecy Nash, Nicole Ari Parker, Yolanda "YoYo" Whitaker and Vanessa, and Angela Simmons, among others.

Kim is determined to leave her mark on the world of beauty and the community at large with her passion for motivating young women to take full control of their lives and be their best selves.